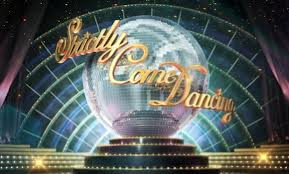 Wembley Week, wooohooo but booo are we here already? It's going too, too fast! So, I loved the judges intro and the pro's opening dance through the ages. The celebs in 80's stylee could've done a much better dance at this point surely? But the feeling of a "show" and spectacle were there and I totally enjoyed it.

But then sorrow of sorrows - Bruce is back with (oh for fucks sake!) more Gangnam Style? Really? Probably went down better with the live audience then it did with MY FACE! 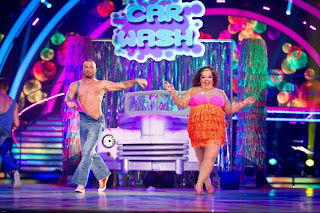 1) Lisa and Robin - Samba
((perv alert))Well, I personally think Robin should wear this outfit all the time, and be all smeared in oil, it is a look which works very well for him! Also BLOODY HELL with the splits! I thought it could have been much sharper and was a little sloppy in places but the entertainment value was high. The camerawork was annoying again and remained so throughtout the entire show - grrrr
Me - 8
Judges - 8,8,8,8 (Tess did a funny joke, I forget what it was, but I'm sure she used the word "blimey" to great effect - Tess after how many years? has finally won me over, just a little bit - she's not Winkleman though but she's kind of alreet like)

2) Nicky and Karen - Jive
In parts he looked so comfortable that this dance looked almost naturalistic or ad libbed, then at other times his neck once again disappeared and he was stiff and awkward. There didn't seem much jiving to me but he really gave a good performance and I thought it was quite good.
Me - 7
Judges - 6,8,8,8 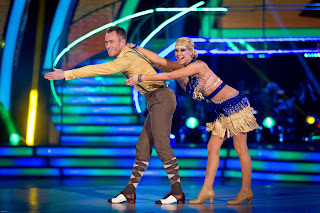 3) Denise and James - Charleston
Absolutely bloody wonderful! I loved this so much, it was joyous, fast, funny and perfectly syncronised. I loved the pared down version of the song, they were perfectly in time and it was just freaking marvellous! ((perv alert)) I also found James somewhat appealing in his BIG socks!
Me - 10
Judges - 9,10,10,10

4) Louis and Flavia  - American Smooth (mebbe)
I had to rewind this twice to make sure I had the right dance written down. I really think that dance looked like a quickstep. It was really fun and I enjoyed it very much the tricks and lifts. And I think Flavia choreographed that for maximum audience enjoyment rather than aiming it toward the judges. It was a dance that broke the rules really but it made for a good dance.
Me - 8
Judges - 7,8,8,7

For an even better example of this I present you with this recent work of wonder. Shawn Johnson and Derek Hough from Dancing With The Stars dealing with the challenge of having an extra dancer. I put it here as Shawn is also an Olympic champion and our Louis could stand watching her kicking bottom. This is a "samba" which Len marked as a 7 for breaking the rules!

5) Richard and Erin - Salsa
The lighting effects were amazing during this routine, and somewhat of a blessed distraction. I don't want to use the word awful, but it was awful! And quite frankly the less said the better. I think it's time for Richard to go, as much as I love him, this just wasn't good enough
Me - 5
Judges - 5,6,7,6 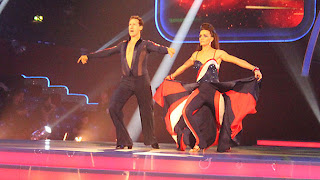 6) Victoria and Brendan - Paso Double
Fooking loved Victoria's Freddie inspired outfit, she looked amazing! The dancing was ok, not geet totally awful but not great. A bit nowt or summat to be honest with you. Not even ((perv alert)) .Brendans bum could really save it. Poor Brendan, fell over last week and took a cape to the face this week. Surely next week has to go right for both of them? Fingers crossed
Me - 6
Judges - 5,6,7,6
7) Dani and Vincent - Quickstep
Dani did such a good job of keeping her top line (ooooh get me!) nice and quiet and letting her feet do all the work. This was elegant and poised and not even a hint of butch. Beautiful, light and fast I really loved this. I do think the wardobe ladies must hate Vincent though, that pink suit - urgh!
Me - 9
Judges - 9,9,9,9
8) Kimberly and((ooer really big perv alert)) Pasha - (I was furious about the Bruce's really rather racist comments but will give him not a jot more of my attention here) Samba
Best samba of the series so far bar none. The worst bit of this dance was realising it happened five days ago therefore I coouldn't vote for her. The minx! FAB-U-LOUS!
Me - 9
Judges - 8,8,9,9 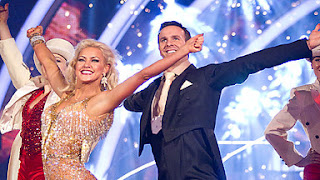 9) Michael and Natalie - American Smooth
A more traditional American Smooth here, a real sense of glamour and finale. I liked the chorus girls which helped with that too. I really didn't agree with Bruno, I thought those lifts looked beautiful and effortless and I really love watching Michael do ballroom. Fantastic
Me - 9
Judges - 9,9,9,8

Opening dance was brilliant - I loved it. Also I loved Tess' dress, it was more relaxed and Winklemanny. I approve.
Result 1 - Richard and Erin - Unsurprising really, their dance was a bit poo.
Girls Aloud - well I really rather enjoyed that, usually I am far more rock chick than pop princess usually but I did enjoy watching the girls back together again.
Lens Lens - Bruno's bumper car face was comedy genius as indeed was Louis doing the robot - I loved that! Bruno and Craig in their harness' made me snort my wine in a manner unbecoming an Strictly blogger. Such fun
Result 2 - Nicky and Karen - I think this is a very fair bottom two to be honest with you.
Winklemanisms  - "Awww I really want to see you cry" to Louis
Kylie - really dull, moving on
Leaving us now is - Richard and Erin. Sad and I love him but I think it was time. Buhbye Richard we have loved you.
( in my notebook I seem to have written in my unintelligible scrawl "Big fish - that was awesome" and can any of you deny that eh? Eh?) See you back here in a matter of HOURS.
Again sorry for extreme lateness due to THOUGHTBUBBLE awesomeness. You can hear what I got up to here - no here 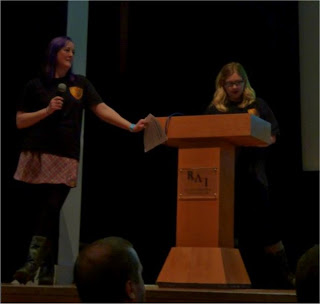