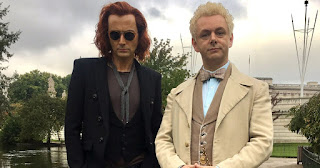 So the Good Omen's mini series then, well, it really isn't the adaptation the fans of this beloved book will be craving. It is entirely the Crowley and Aziraphale show and that is both its strength and its weakness.

Strength because these characters are funny and adorable and we already love them and because Michael Sheen and David Tennant have been perfectly cast. Each inhabiting the skin of their character so utterly you forget what your own mental image of the two was like. And because the chemistry between the actor's is almost tangible. We see their relationship develop over 6000 years and it is hurt your heart and tummy lovely without being cloying or overly sweet or overly in your face. It is heart warming.

And weakness, because this perfect, wonderful relationship and character development is at the expense of almost every other part of the story. The kids man, where are the Them?  And where are the Four Horseman and especially the 'other' Four Horseman? 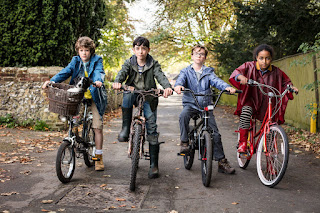 These aren't just throw away character's who don't drive the plot, these characters ARE the plot to a large extent. I understand why the soaked little sister is missing and Greasy Johnson et al. But that feeling of lots of strands coming together, all parts of the story congregating at the big finale, that is missing. The feeling of urgency and I don't know...threat it just isn't there.

I do, however, like that the Queen joke remained.

From an acting point of view, some of the cast were stellar. As previously said, Tennant and Sheen are exceptional but Pepper (Amma Ris) didn't do it for me, I always think of  Pepper as strong and opinionated rather than stroppy and overbearing, which is sadly how she came across, like Hermione in the first Harry Potter.  Adam (Sam Taylor Buck) was nearly but not quite there, some element of charming just missing. But close. The rest of the actors were sadly underused, I wanted more of  Miranda Richardson and particularly of Michael Mckean. I definitely wanted more horseman action (I don't understand why the introduction to War scene was changed, I loved that bit in the book, timing or cost I imagine). And Pollution, beautifully realised and mostly forgotten. I did however absolutely love John Hamm's ramped up Gabriel, isn't he just wonderful?

And let us talk about Anathema a moment, Adria Ajona is a stunningly beautiful woman and a fabulous actress, the fault was not her's but with the material there, Anathema is a bit of a oddly written character, like the writer's had an idea of what a woman is but couldn't quite make one,she is an approximation of a woman. It is a shame that couldn't have been ironed out a little, Agnes is a far more interesting character isn't she? 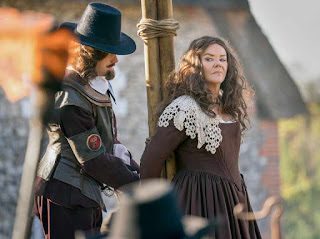 That sounds quite negative but overall I thoroughly enjoyed this mini series, the opening credit's with their quirky animation, the music, the spectacle of it made it unmissable event. There is still plenty of joy and excitement to be found here. And though I think the soul of the story is somewhat missing, the heart of it is absolutely there, right on it's sleeve.

Because I love the credit's so much I am so sticking them in here!