Hullo again and here we are with another auld blog. Nothing much has changed in my opinion about this sublime bit o gorgeousness, Yesterday's Enterprise, not only outstanding Trek but outstanding telly.  I think as I am aging I am even more nostalgic for 80's and 90's telly. I mean I didn't watch Seinfeld first time round but I am caning about 4 eps a night of that at the moment. It isn't like we haven't got a plethora of awesome geek telly at the moment, and the list of things I want to watch is longer than reasonable. But these things, they hold such a place in my heart. Such a big place. Is it because this is the telly that shaped me, this is where my geekdom developed? Maybe, but it really is just good telly too.

The only update really which is also very old news is that at time of writing I did not realise that the sexy bit stuff who plays Castillo (still waiting for his spin off show) was one of the T-Birds in Grease 2. I mean, who knew? 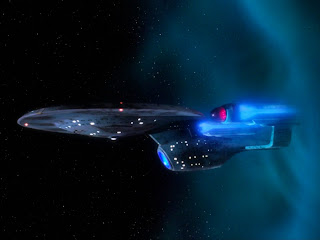 I know I’ve written blogs about older shows before but forgive me, I’m in my mid thirties (HA says future me, now 41 years old!) now and I get nostalgic. Which is why I want to talk today about Star Trek The Next Generation.

I used to watch this programme with my whole family, it was unmissable television for all of us, and I have very fond memories of sitting in the dark (that’s how my parents like to watch television) glued to the screen. ST:TNG is my Star Trek, the way Peter Davidson will always deep down be my doctor and though rewatching episodes now – as I have been thanks to one of the Sky channels showing reruns – sometimes shows it up a little or dates it quite a lot or is somewhat embarrassing in its OTT and technobabbly ways there is so much still to love and be in awe of. And while the Borg episodes are up there with innovation and terror and the final episodes can still reduce me to a weeping mass on the floor. This episode; Yesterday’s Enterprise is a shining pinnacle of what Next Gen could achieve.  It probably doesn’t need yet another brilliant review 21 years after its release date, and I am aware that I am not alone in my reverence of this episode so please humour me and wallow in the nostalgia too! 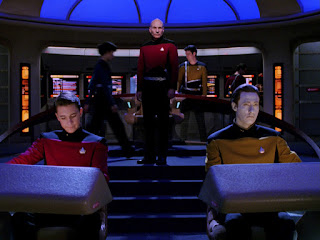 The premise of the episode is that our Enterprise (the Enterprise D) comes across a time rift in space from which a ship emerges and instantaneously everything changes.  The Federation have now been involved in a long and bloody war with the Klingons and the ship itself changes, the Bridge is completely different, darker, busier and most shocking of all, Worf is gone and in his place is Tasha Yar his dead predecessor! Guinan is the only one who notices the change and understands the only way to correct the timeline is to send the new ship back. The new ship is the Enterprise C, a ship which was destroyed 20 years earlier defending a Klingon outpost from a Romulan attack. This ship is run by Captain Garrett, when she is apprised of the circumstances she tells Captain Picard they will stay and fight, he explains to her how bad the situation is and that the Federation is only months away from defeat, but that if her ship went back – on a recognised suicide mission – it could save them all. The decision is made, but while preparations are made Klingon Warbirds attack, killing Captain Garrett and Tasha having been told of her previous fate by Guinan asks for and receives a transfer to the Enterprise C. The ship returns to its proper timeline and normality instantly resumes.

Everything about this episode is sublime and perfect. The changes in the Enterprise D are many and appropriate; the darkness, the busyness, the lack of Troi – who needs a counsellor in time of war? The slight differences in character are subtle and beautifully portrayed - gone is Picard the diplomat, the assessor, the man who will take ideas and leads from his staff, instead here is Picard the general who is completely in charge, gone is his easy relationship with Riker – and his portrayal is far less confident than the Riker we know. 10 Forward has a more canteen like look where rations are served, replicators take up too much weapon power, and uniforms are different and darker too. The whole effect gives us a very good insight into this awful timeline.  It’s lovely also to see the red uniforms from the movies used for the Enterprise C staff and the adding to the brilliance of this episode are the characters Captain Garrett, a strong female captain I wish I could see more of and Lt Richard Castillo, who helps Yar provide exposition in a nice way and goes on to save the day. 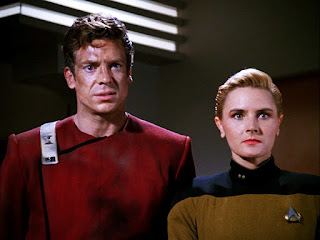 So, the sets are great, the actors are great but above all it’s a perfect premise, I like very much that no explanation is forthcoming to the nature of the anomaly – it’s beside the point and would have spoiled something for me. The simple fact is history has been altered; its ramifications are enormous so history and therefore present time are restored. That simple premise gives scope for some brilliant emotional storytelling and most of all a noble and better death for Tasha Yar, a character who was initially bumped off in a less than dignified manner. It gives nice resolution for her and a very satisfying watch for the viewer. This episode is also somewhat of a stripped down episode – there’s not much technobabble – something the series was in the habit of doing – there is nothing extraneous, everything that needs to be there is there and nothing more and that helps so much with the believability of the second timeline and this episode is one of the shining jewels over the entire Star Trek franchise as far as I am concerned – we will not speak of any Romulan Yar descendants as that may well give me physical pain!