Oh so my blog is still here? Phew!

June 06, 2019
It has been a long time since this Whittle has Waffled hasn't it? Who knew blogs even still existed? Well ya bugger.

I recently found a whole load of (unedited) blogs I wrote over the years for the SFX website and other things like Hub etc and thought I might stick them on here so I can still find them. Some not relevant, some really old reviews - but most still purchasable books or watchable films or telly so yer nah, whatever. It's my blog innit. So bits and bobs of my writing. Coming at you in spurts...as it were.

First up this, written in 2009 I think. Probably for SFX can't remember. (I have added pic and video) I don't know what Alasdair said to me, if you're reading this mate and you remember - let me know!

FYI, I feel this passionately about Superman now, if not moreso. (Would I still argue for it being best Comic Book Movie ever made...I'm not sure. I need to think about it, maybe that is another NEW blog AHA!)  I tried to make my 15 month daughter watch it with me on Monday but she was having none of it so we compromised and I got to watch it on my own while she was napping then she got to watch 3 hours of Hey Duggee! Seemed legit at the time...anyhoo on with the old bloggage!


I Believed A Man Could Fly 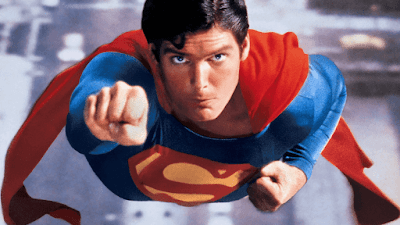 You know I didn’t really realise until very recently how much of an influence Superman The Movie has been on me and my geek girl status. I have an overriding affection for this film and it is in the forefront of my mind at the moment after I appeared on The Eclectic Podcast recently and argued my case for it be The Greatest Comic Book Movie Ever Made. I’m pretty sure I won that argument ahem! I also talked about it on my guest spot on the Comic Racks Podcast then I realised I’d written about it in my application email to blog for SFX.  So it’s a much more important film to me than even I recognised.

Why the love? You may well ask, the film does have a lot of flaws, it looks quite dated these days and some parts of it are desperately cheesy (the “can you read my mind” section springs immediately to mind!). I think the answer is in the main two actors, Christopher Reeve and Margot Kidder. Kidder’s Lois Lane is wonderful, she’s smart, sassy incredibly confident yet very loveable. She is an inspirational lady.  Christopher Reeve’s portrayal of Superman is really good and believable, but Superman isn’t the interesting character and it’s Reeve’s performance as Clark Kent that sets this movie so far apart from everything else for me.

There is a moment, a tiny moment mere seconds in the movie when Clark is in Lois’ apartment waiting for her and he obviously (nothing is said!) decides he is going to reveal his secret identity to her, he talks off his glasses, he unfurls to his full height and he ceases to be Clark Kent and it is clear to anyone that it is Superman in a black suit standing there. He suddenly changes his mind, his glasses are back on, he loses height and his speaking voice changes and there is no trace of that superman there at all. It is pitch perfect, it is an astounding piece of character acting, those 30 odd seconds are what take this movie from good to great. That moment can easily reduce me to tears. The affection that Superman or maybe Christopher Reeve himself has for Clark is also very apparent within his performance, he obviously is having enormous fun with the character and that joy is infectious. These characters are whole and real to me. I know Lois likes her hamburgers with everything on and her orange juice with no bits in it. I know about her passion for her job and her love for Superman. I know that Clark loves Lois and that Superman can be more human than some people can and he is certainly not an emotionless man.

I do know that my passion doesn’t come from the comics; I have to admit I have never read a Superman comic and really wouldn’t know where to start if I did.
Nostalgia  has a part to play, I can’t remember how old I was when I first saw this film (which I am only a year older than) but I was very small, and I have seen it countless times, I’ve watched it so many times that I can talk along with the dialogue and it never, ever gets old. So it does have long term affection tied into it. And there is the fact that the opening bars of the awesome theme music can give me goose bumps.

I won’t give you my Superman Returns rant, that *does* get old and I won’t start in on my almost as deep love for the second Superman film as I will be here all day!  The fact is I love Superman the Movie and I always will!

My thanks to Alasdair Stuart for suggesting I write this.