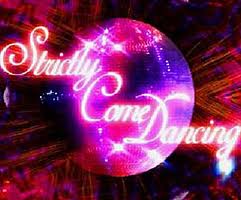 It's back! My favourite time of year coincides with the beginning of one of my TV highlights of the year. I love Strictly. I love everything about it (with the massive exception of Brucey) the glitter, the orange spray tanning, the "funny" training clips and Brendan's perfect bottom. I will once again be doing my big weekly review starting, well, right now people!

Firstly, I need to say how over the bloody moon I am that the dance off is back this year, I really missed this feature and removed some of the fantastic tension that made the Sunday show an unmissable episode. Secondly, I welcome Darcey though somewhat reservedly, though honestly I STILL miss Arlene. 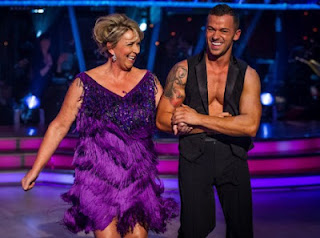 1) Fern and Artem - Cha Cha Cha
Fern looks amazing and though I thought this was a little slow for a cha cha cha and there was a little bit of mammy dancing about it that is entirely cancelled out by Fern's Fabulously Flirty Face henceforth known as FFFF. She is sexy as and no mistake. Go Fern!

2) Nicky and Karen - Waltz
Otherwise known as No Neck Nicky And The Attack Of The Killer Pineapple. Disappointing I thought, I had high, high hopes for lil Nicky. He is incredibly endearing though so forgiven - this week!

Judges Score - 2,5,5,5
My Score - 4
Oooh the judging. Craig's rant was brilliant I MISSED HIM SO MUCH! Darcey said yes or yar a total of 5 times in her minute summation, I think she is secretly The Dread Pirate Darcey and has a cutlass hidden craftily under the judges table! 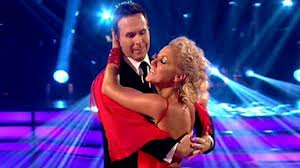 3) Michael and Natalie - Waltz
Aww bum sticking out alert along with obvious counting with tongue occasionally sticking out - I think I'm in love what a star!

4) Victoria and Brendan - Cha Cha Cha
Fantastic opening, loads of content and then aaaaaaaaaaaarrrgh she totally lost it. It was watching through your hands time. Such a shame and I was actually welling up for her. I think she'll nail it next time - obvious potential and I loved how Brendan (I MISSED HIM SO MUCH) looked after her, he's lovely (biased)

(Just a quick aside here to mention that Tess' dancing bike joke was so terrible I was ACTUALLY embarrassed - I MISSED HER!)

(another quick aside Bruce bog off with your "jokes" urgh - I in no way missed him!) 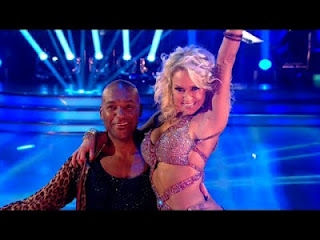 5) Colin and Kristina (I LOVE her, I MISSED HER) - Cha Cha Cha
I had few expectations for Colin and was blown away, I had to remove me cardi and put down me knitting he was *that* good! Lithe, gorgeous and hiptastic - Colin just went top of my favourite list also props to Kristina whos choreography is always immaculate.

6) Denise and James - Waltz
I wasn't looking forward to Denise that much, I used to find her quite annoying on breakfast telly and the like. I am now a Van Outen convert - she is bloody great. Wonderful elegant dancing, amazing gurning in the training videos, fantastic sense of humour. Yup it's love. Also James how I MISSED HIM!


I shall do part two in a separate entry. Hold tight!